Unusually for AMOC the first race of the season was at Oulton Park. A circuit where we’ve had good results in the past but a daunting track which does not forgive mistakes.

We did two 30 minute sessions on Friday afternoon to get familiar with the track again and make sure the car is running ok for the race day on Saturday. Friday went well, and we did 2 laps in the 1minute 55second region, which would have put us on pole based on last year’s lap times. So we went away Friday evening pleased with the car and the pace we had.

Saturday was significantly cooler than Friday which effected grip levels for qualifying. Qualifying was good and we had several clear laps, we didn’t get into the ‘55s like Friday but very close. We ended up P6 for the race in the afternoon, with a lap time that would have been pole the previous year, so disappointed with the result but happy with the lap time. The Intermarque has moved on from 2014 and it seems everyone has improved either their cars or their driving.

We have improved the car (I like to think the driving is better too), we have upped the engine to 3.8 litres and fitted RSR+ camshafts. So we have significantly more power than last year, and therefore we have to move from class B to class E, the top class. So based on our new class we are expected to go for overall wins and podiums, rather than just class wins, no pressure then.

We made a good start from the rolling start, around the outside of the 2 GT4 Astons at the first corner then power past the white and red 968 of the two James Hilliard on the next straight. From P6 to P3 before the 3rd corner was impressive, but it was very surprising that the Ferrari 355 of Wayne Marrs and Aston V8 of Chris Scragg weren’t pulling away at the front. They both qualified significantly quicker than us. Chris was in the lead defending very hard which was slowing them both down and giving a chance to the chasing pack, led by us with the 968, GT4, and another 355 close behind.

Wayne eventually made a mistake trying to go around the outside of Chris at Old Hall which didn’t work and left the door open for me to come through the inside. We had 2 laps of pressurising Chris Scragg for the lead of the race. A very experienced Scragg knew exactly where to position his very wide V8 Aston and we couldn’t get through. We made the same error as Wayne had earlier in the race, and tried to go around the outside, this didn’t work and let through 3 cars on the inside. I crossed the timing line 0.7 seconds behind the leader that lap but was 5th, the front of this race was so close and the battling was so intense.

A GT4 Aston made a silly move up the inside of Wayne into a chicane which wasn’t on, he clouted the inside curb and speared into the back of Wayne spinning him out, and causing a reshuffle of the front of the pack, both cars involved continued on.

When the pit window opened, Wayne pitted immediately and we pitted the following lap, leaving Scragg and Lee Moulden fighting for the lead of the race. The early pitstop allowed us to put in some quick lap times to jump the still fighting Scragg and Moulden by the time they’d pitted. But the times weren’t quick enough to hold off Wayne in the 355, who came past in a daring move around the outside at Old hall, a move he couldn’t make on Scragg earlier in the race. Now the race had settled down in terms of gaps we still had Scragg catching from behind and back markers to contend with which occasionally bought us close to Marrs in the lead.

Eventually the race ended with Wayne Marrs winning followed by us in second and Chris Scragg in 3rd place. Our best ever race result in all series we been involved in. So we were very pleased to get the stand on the podium.

The next race is at Donington Park, which I’m sure will be just as close. 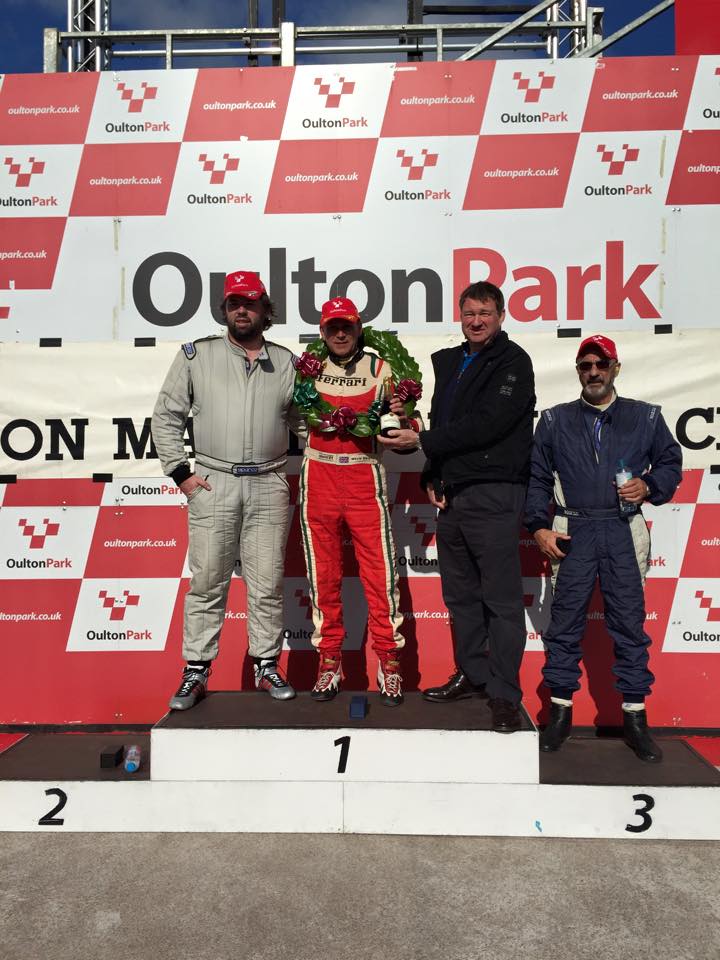