With various engine issues at the start of the year causing a loss of power we chose to miss the first 2 races of the season in order not to damage the car further, and also a chance to develop the car a little bit to make it more competitive.

Having not raced at Rockingham since 2008 we were unsure of what to expect, we knew the car was good enough to win, but was the driver?

Friday testing went very well, we familiarised ourselves with the circuit very quickly by following closely our nearest rivals, who we knew had recently tested at Rockingham before. During the day, we were running faster than the majority of the Intermarque grid and felt confident going into race day.

Into qualifying we knew the battle was on between us and the 29 Feathers Motorsport car of James Guess and James Hilliard. In the end though we were beaten to pole by 0.4 of a second.

Going into the race we were confident, we knew we had the power to frustrate the competition, but they probably had the corner speed to make up lap time. Starting 2nd I manged to make it into the lead on the 3rd corner and hold onto it for a few laps. Hilliard came back past and pulled a gap of around 2 seconds. The gap looked difficult to reduce, but over the course of the next few laps before the pitstop it was reduced as tyres started to go off and mistakes were being made under pressure. We retook the lead and pitted on the same lap. Hilliard took his chance over 1 lap to try to retake the lead in the pit stop but couldn’t, one lap later Guess emerged from the pits just behind. Then the chase was on.

As the race went on the tyres on our car went off, and clearly the tyres on car 29 were no better. As the tyres got worse and the race went on the lines and driving style got more and more outrageous. The pressure got to James Guess in 2nd place and he spun off at Gracelands, 3 laps from home. With the pressure off now and the lead over new 2nd place man Andy Peck over a lap we cruised for home and took a comfortable victory, at the end of a very hard race.

Next up is Snetterton on 8th July. 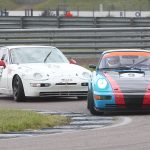