Its been a long time since our DNF at the final round of the AMOC intermarque 2014 championship at Snetterton, but we finally got our engine off to Richard Chamberlain at CTR for a strip down and investigate the cause of the failure.

Richard reported back quickly that a cylinder head had cracked, and he was surprised that it hadn’t fallen off the engine completely. By the time we had sourced a cylinder head from fellow competitor Stephen Archer Richards had reported back again that the engine has further damage, caused by detonation, so we also needed to get hold of a new set of pistons and barrels. Richard is well under way with building us a shiny new engine for this years Intermarque championship. 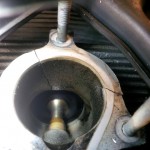 The Yellow Peril is also with Richard, last time out testing it wasn’t making power and was getting very hot at the rear. He has since changed some burnt out plug leads, and changed the map slightly, and it made good power on the rolling road. Richard has since tested it at Brands Hatch and it reportedly overtook a 458, but he was pinged for noise. So a new silencer is needed.

So both race cars are being seen to over the winter, but we’re excited about the coming season and Mum has just put a deposit on a new 997 Cabriolet. 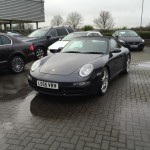