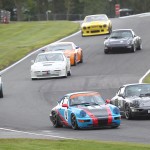 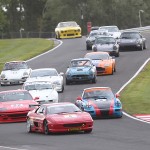 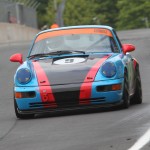 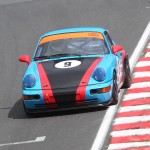 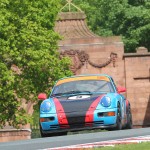 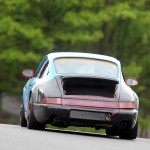 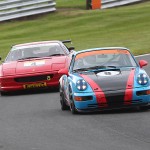 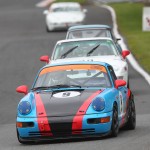 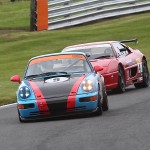 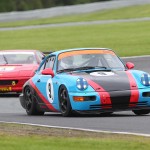 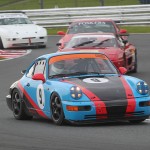 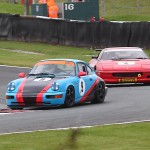 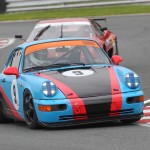 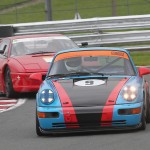 After testing the previous day I was confident going into qualifying Saturday morning. With rain clouds looming it was important to get a good lap in early. Qualifying went to plan when I managed to do a quick lap on my first flying lap, the second lap was quicker but I got blocked going through the final corner so that lap was wasted.

The rain started to slowly fall and the times only got slower. I had managed to qualify 4th overal and 1st in class which I was very pleased with.

Throughout the day it rained on and off, but by the time we had to go to the assembly area the rain had settled in. We didn’t have a full wet race tyre so we chose to go with our Toyo R1R’s which are an intermediate tyre. Once the race started it was clear what tyres everyone around us was on. The front row V8 cars immediately disappeared off into the distance followed by the green DB4. I managed to get the jump on the red 355 ferrari of Wayne Marrs, and I held onto 4th place until the Jeremy Cooke came past just before the pit stops, he was also on wets and I just couldn’t keep up with him.

After the pit stops it appeared that Wayne had got faster in his 355 (it turned out that they used the pitstop to cure a misfire). Wayne managed to get passed with his increased speed, and I held position until the end. I finished 6th overal and 1st in class, with a good haul of points after the disappointment of Silverstone.

After the braking problems encountered at Silverstone we changed the front callipers, disks, lines and pads and we also changed the rear pads and disks. With so many changes we decided it would be a good idea to go testing before the race at Oulton Park.

We went out for the first session just after lunch, with the aim of re familiarising myself with the circuit. The car felt quick and I started to turn some quick times, but the brakes began to fade after around 15minutes again. We let the car cool down then bleed the brakes and adjusted the way the vents in the reservoir cap were working. I went out for another session later in the day and the brakes were significantly better and I started to feel confident about the next day.